Charged with an underage DUI? 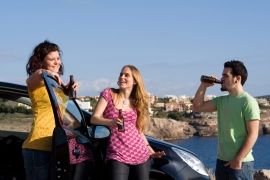 Charged with DUI and a Minor?

For drivers under the age of eighteen (18) charged with drunk driving, their case will be before the Family Court.

With over twenty-eight (28) years of legal experience fighting DUI charges, Attorney Humphrey and his dedicated legal team know how to defend your rights against all types of DUI charges. Attorney Robert H. Humphrey has gained a reputation throughout Rhode Island for his effective work in fighting DUI charges on the behalf of youthful drivers. Mr. Humphrey has also been recognized as the DUI Defense Lawyers Association's State Ambassador for Rhode Island.