Robert H. Humphrey, Esq., a founding member of the DUI Defense Lawyers Association ("DUIDLA"), has recently been appointed the DUIDLA Ambassador for the State of Rhode Island. This national organization was founded on the principles of protecting and ensuring our citizens' rights guaranteed by the State and Federal Constitution in drunk driving cases. The DUIDLA has created the DUI Defense Lawyers Association Justice Foundation ("DUIDLAJF") which is a charitable foundation established to fund the education and training of public defenders and criminal defense lawyers committed to promoting justice. Regarding this honor, Attorney Humphrey stated "I believe this new nationally recognized DUI defense association will make great strides in promoting the education of criminal defense lawyers and justice for those accused of drunk driving."

If you've been arrested on DUI charges, contact our office to discuss your case today. 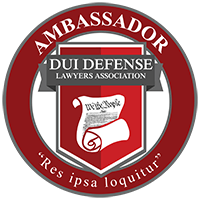