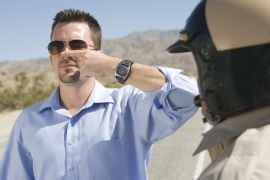 Field sobriety tests are used by police officers, highway patrol officers and other law enforcement officials to make an on the spot determination of whether or not a driver is under the influence of drugs or alcohol. Police officers typically ask motorists to perform field sobriety tests during a motor vehicle stop. The tests are conducted out of the car, by the side of the road.

The first thing to know is that you do not have to submit to a field sobriety test. The police can still arrest a motorist without the performance of field sobriety tests; however by refusing to do the test, the results cannot be used against you. There is only three (3) standardized field sobriety tests that law enforcement personnel are trained to administer. The standardized tests include the one leg stand, the horizontal gaze nystagmus test and the walk and turn.

In the one leg stand, the officer will instruct a suspected drunk driver to stand with legs together, arms at sides and to lift one leg about 6 inches from the ground and hold it for thirty (30) seconds. The horizontal gaze nystagmus involves having an individual follow the tip of a pen as the officer moves it from side to side in front of the person's face. The officer is looking for any erratic jerking movements of the eye which may indicate intoxication. In the walk and turn test, the officer instructs the driver to walk nine steps, heel to toe, turn and then take nine steps back along the same line in the same fashion. The officer may use a painted line on the roadway or the line may be imaginary.

These tests are highly subjective and the results are based solely on the officer's individual observations of "clues" which indicate intoxication. There are numerous environmental and physiological factors which can cause someone to "fail" any of these tests which are unrelated to alcohol or illegal drug intoxication. The results of the tests are designed to provide officers with probable cause to arrest a driver for drunk driving.

Pre-exit field sobriety tests are conducted before a motorist exits his/her vehicle. The most common types of pre-exit field sobriety tests are the alphabet, backwards counting and fingertip test. Both the alphabet test and counting tests require the motorist to begin the test at a random point, such as saying the alphabet from H-O or counting backwards from 27 to 13. The officer is looking for skipped letters/numbers, repeating letters/numbers and an inability to perform the test. The fingertip test requires a motorist to count while touching his/her fingertips. It is designed to test a motorist's concentration and coordination.

Attorney Humphrey is extremely knowledgeable about the types of field sobriety tests used by the police and how to get their results suppressed. A DUI conviction can result in some very harsh penalties so it is vital that you have the help of a Rhode Island DUI lawyer who has a strong understanding in this area of the law. Attorney Robert H. Humphrey has over twenty-eight (28) years' experience successfully handling drunk driving cases. He understands what you have at stake and will work hard to preserve your freedom.