What will happen to me if I have more than one DUI conviction? 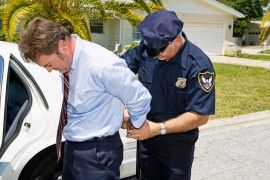 Second and subsequent DUI charges are extremely serious. Drivers are exposed to harsher penalties, loss of license for years and mandatory imprisonment. The need to defend against subsequent DUI charges is absolutely critical and a Rhode Island DUI lawyer from the Law Offices of Robert H. Humphrey may be your best chance at doing so.

Second Offense DUI – Readings of .08 - .15 or Unknown BAC- If you are found with a BAC level of .08-.15 for a second DUI offense, then the penalties may include ten (10) days to one (1) year imprisonment as well as a $400 fine. Your license can be suspended for one to two years and you could be required to install an ignition interlock device in your vehicle for one to two years. You may also be required to complete an alcohol or drug treatment program and other assessments.

Second Offense DUI – Readings over .15 or DUI-Drugs- If this is your second DUI offense and you are found with a BAC level of .15 or higher, then you could be facing six months to a year in jail. Penalties may also include a $1,000 fine and the loss of your license for two years once your jail sentence is completed. Offenders are also required to submit to an Alcohol or Drug program and other assessments.

Third Offense or Subsequent DUI - Readings of .08 - .15 or Unknown BAC- With a third DUI offense, individuals arrested with a BAC reading of .08-.15 facing 1-3 years behind bars and will be required to pay a fine of $400. Offenders will lose their license for two to three years and could possibly be required to install an ignition interlock device in their vehicle for up to two years. An Alcohol or Drug Treatment program could also be required.

Third Offense or Subsequent DUI – Readings over .15 or DUI-Drugs- If you are facing your third DUI charge and your BAC reading was over .15, then you could be sentenced to a three to five year sentence as well as a $1,000 to $5,000 fine. Your license will also be taken away for three years from the date of your sentence completion.

The Law Offices of Robert H. Humphrey has worked hard to protect their clients from the most severe consequences of DUI convictions. As a former prosecutor for drunk driving cases, Attorney Humphrey has a unique insight into the practices and methods of the prosecution in terms of how DUI cases are approached. The firm reflects this invaluable experience through their unparalleled dedication and expert-level representation, which may be the difference between maximum conviction, lesser penalties or even not guilty verdicts.

Contact a Rhode Island DUI lawyer if you are facing a second or subsequent DUI charge in order to be represented by a professional who knows how to approach your case.